Get to Know Braille Battery 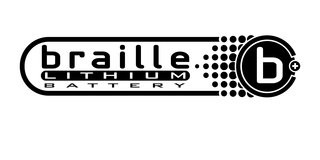 If you haven’t heard about Braille Battery, chances are you’ve cheered for cars that run on their batteries- from Formula 1 and Indycar, to 24 Hours of LeMans, Rolex 24 at Daytona 24, all the way to Mazda Road to Indy and Formula SAE!

Braille Battery, based in Sarasota, Florida, is the world leader in ultra lightweight Lithium-Ion high performance batteries for nearly a decade with a range of models designed for street machine, amateur & club racers to top level pro racing vehicles around the globe. Braille also distributes and sells the highest performing lightweight AGM battery line (highest cranking amps pound for pound) for performance street, hot rod, import tuner & race vehicles. The company name reflects the concept that advantages of weight reduction in racing are sometimes only felt, not seen. Braille Battery is currently the lithium battery of choice used exclusively in every car in: Indycar & Indy Lights, SuperGT in Japan and Australian V8 Supercars, along with a large majority of the

For years, Braille has been supplying top teams in just about every type of racing around the world. Now, they’re brining their race-proven technology to the performance street, track day and club/amateur racers with their lightweight AGM line (often half to a third the weight of a full-size battery) and the lightest, best performing and longest lasting (10-15 years) battery with their GreenLite lithium G20 & G30 models in the 5 pound range!!

Braille’s passion for bringing lighter and better batteries to all levels of racing is clear when you talk to Gary Savage, the Director of Global Sales for Braille’s Performance Division. Regarding the new partnership to serve SCCA members, Savage remarked “While Braille Batteries have been used in street & race cars by SCCA members for years, we are excited about being more involved with Sports Car Club of America as many outside of professional racing world have often never heard of “Braille Battery” before.  As a small company here in Florida, our core products and market have always started in racing and while we are proud to have “started at the top” by supplying professional racing teams & series around the globe for nearly a decade, we have our lightweight AGM and GreenLite (automotive spec) lithium models available for those looking for a smaller, lighter, stronger, longer lasting or more reliable battery for their street or track vehicle.  Most people don’t think about the battery until it DOESN’T work or is a hardcore racer looking to shave weight off the car knows that “weight is the enemy” and reliability is key to winning!  That is what Braille Battery is all about!!