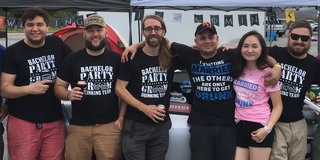 We’re probably not supposed to give away secret identities here at SCCA.com. If you’re looking for a real name, it may be listed next to the No. 009 Honda Prelude line on the entry list for Tire Rack Time Trials National Powered by Hagerty. But for us and thousands of fans on the popular YouTube channel and other places on social media, we’ll call him FlyinGato.

FlyinGato, as the legend goes, learned a hard lesson with his Honda Civic Type R at a GridLife event, meeting the wall and putting the car on the shelf. And while it wasn’t the end of the world, it understandably shook his confidence. While the Tire Rack Time Trials National Tour event at Thompson Speedway was a chance to bring out his Honda Prelude – his high school daily driver with 240,000 miles on it - an upcoming wedding meant that time and resources were depleted, right down to the fact that the wedding was scheduled for the week after Nationals at NCM Motorsports Park. Coming to Nationals would have to wait a year.

It was his soon-to-be wife who first had the idea, though event lead Heyward Wagner and coach John Hunter independently reached the same conclusion soon after. Why not make Time Trials Nationals the bachelor party?

Soon, two buddies, a fiancée and a maid of honor were loaded into a pickup truck tow vehicle bound for Bowling Green, Kentucky. A plane ticket was booked for a best man flying from the Dominican Republic. And a fourth friend drove down from Chicago to join the festivities, which included a tent city in the NCM Motorsports Park paddock for sleeping, napping, and forming morning headaches (after hours, of course).

“I went to Thompson after my crash and knew back on track was where I was meant to be,” FlyinGato said. “I looked at the schedule and the next feasible one for me was Nationals. I really wanted to come here, but literally the wedding is next week.”

That’s when the plan came together. As an SCCA members, would you expect any less?

Buddy Larry Pruett was working in Chicago, but drove his BMW 335D down on Thursday to join the festivities. A car guy, Pruett had never been on track, but the high torque diesel motor seemed like the perfect car for Time Trials Nationals to FlyinGato.

As with all good ideas, Pruett was against it at first but was finally convinced around 2 a.m. on Thursday night. The novice driver entered the event and is now in the Prepped 1 class, and making plans for next season’s Time Trials National Tour.

“I’ve got 1300 or 1400 miles still to do after beating on it this weekend,” Pruett said. “I’ve got to go back to Chicago for four days, then drive it home to Iowa before flying to his wedding next week. He’s trying to convince me that I need to go to three or four events with him next year, which I’ll probably do.”

Welcome to the SCCA, Larry! 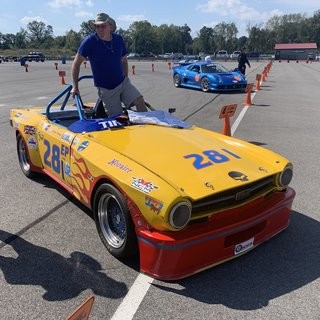 With the SCCA Runoffs yet to come this month, many of the road racing community is in full-prep mode for that Championship event at VIRginia International Raceway.

Bowie Gray’s E Production Mazda RX-8, which is a former Runoffs competitor, is running at Time Trials Nationals in Unlimited 2. Mike Munson took advantage of the event just six miles from his home in his E Production Triumph TR6.

A finicky car in the best of times, Munson had to head back to his home shop on Thursday night to change the head gasket in the car. With that out of the way, it’s been full go for the rest of the laps so far for the bright yellow road racer.

One Last Time To Score

With TrackSprint on Saturday morning and Saturday afternoon’s lapping sessions, two of the three elements that make up the final combined scores have been set.

Each driver will get two combined sessions on Sunday, with the best lap around the 3.2-mile circuit the third and final element to determine who will take part in the KONI Podium Celebration on Sunday evening.