Big Win for Minor at Runoffs® in Formula Continental 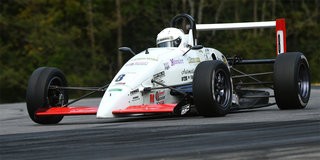 ALTON, Va. (October 12, 2019) – Tim Minor, the 59-year-old fixture in the Formula Continental (FC) class of the SCCA, captured his first SCCA Runoffs® Championship victory at the wheel of the No. 8 Automotive Specialist/Hoosier Citation.

The Falls Church, Virginia driver crossed the finish line 12.3 seconds ahead of second place. And for Minor, who has won at every other level he has raced, including the F2000 Pro Series, the Runoffs win had been a long time coming.

“This has been my Achilles heel,” said the 10-time Runoffs® starter. “This is something that people look at. When you tell people you’re a national champion, it’s important.”

Minor inherited the lead of the event from a Dominant Robert Allaer when Allaer had a mechanical failure in his Van Diemen.

Despite taking advantage of the dominant Allaer’s misfortune, Minor’s week wasn’t without trials. A crash in testing left him scrambling to repair his car and issues from that incident created a domino effect going into qualifying.

“We spent a day and a half putting the car back together, I go out in the qualifier and the rear wing came loose. I went out in the third qualifier, I hooked a wheel on the exit of (Turn) 10,” said Minor when describing his week. “I was just trying too hard.”

Once Allaer did have his issues, Minor had one thought in his head, “Push. You never stop pushing, it’s eyes forward and go.”

Behind the leaders, the hotly contested battle ended up being for second place between Rick Payne in the No. 75 Van Diemen and Joe Colasacco, driving the No. 4 Auriana Racing Van Diemen. The two previous National Champions swapped the position no fewer than six times in a battle that culminated on the last lap when Payne tried an over-under move, slid off and then ended up in the Turn 5 tire wall giving the position to Colasacco.

“There was a couple of tricky moves he put on going into one and by concessions,” said Colasacco. “The chances he was taking, I was trying to stay out of his way.”

Third place went to Glenn Cordova, from Effort, Pennsylvania, at the wheel of the No. 41 Cordova Racing Services Citation.

“The other guys were walking away and (Colasacco) and Payne were duking it out, so I was just biding my time,” said Cordova, driving a car borrowed from John Dole. “I saw Payne went off and thought, ‘oh boy, podium position possibly,’ and brought it in.”

Chuck Moran, from Oakton, Virginia, finished fourth and Alex Tollefsen, from Brooklyn, New York, finished fifth. The Sunoco Hard Charger was Marc Stern, who earned the award for driving the No. 51 BPC Motorworks Van Diemen from tenth to sixth place.

Live, online video coverage of Runoffs races, presented by Mazda, is available throughout the three days of competition at SCCA.com/live. An audio race call, supplied by the Super Tour Radio presented by Hoosier Racing Tire broadcast team, is also available at www.SCCA.com/live, as well as live timing and scoring for each National Championship race.